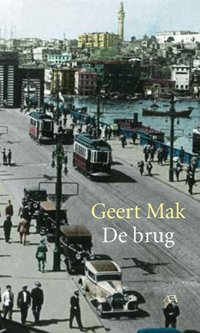 Written as Dutch Book Week special in 2007, De brug evokes the atmosphere of a city which straddles two continents, connected by a bridge. These are stories about the old Turkey and the new, based on encounters on the bridge that links the European and Asian sections of Istanbul.

“No one really knows what the umbrella salesman’s up to.” The sentence would make a fabulous opening for a novel, but the umbrella salesman in question will probably never have the privilege of serving as model for a fictional character. “Some people say he’s actually wealthy, that he only stands here on the bridge because he doesn’t want to stay at home with his wife.” But then there are so many stories circulating on the bridge, where he peddles his wares.

In 2006, Geert Mak spent weeks on one of Istanbul’s busiest bridges, getting to know the sidewalk merchants: the tea vendor, the book salesman, the peddler of orthopedic soles and the boys who hawk illegal cigarettes. Most of them are poor as poor can be, barely able to their keep their heads above water; they live from one day, one hour, to the next. And they all have their own worries, their personal sorrows, their strategies for survival, their dreams, their own stories.

The bridge where these peddlers do their best try to eke out a scanty income is a city within a city. Like all other communities it has its own hierarchy, loyalties and taboos, its fears, sorrows and joys. Mak spends day after day with those who frequent the bridge, listening to what they have to say: about free speech, about Islam and the West, about headscarves and women’s liberation, about honor and blood revenge.  Together, these stories paint the portrait of a complex society, of the city of Istanbul, a melting pot that is home to ten million people: to Muslims, Armenians, Jews, Greeks and Westerners, to liberal urbanites, to those who have left their remote villages to seek their fortune in the big city, to glue-sniffers and the dazzlingly wealthy, to girls with pierced navels in breathtakingly short miniskirts, and to beauties veiled from head to toe.

Mak weaves together the stories of the sidewalk vendors with the history of the bridge, and so with that of Istanbul itself. The city was once the heart of a vast and powerful empire. In the twentieth century, however, that traditional, multiethnic, multi-religious Ottoman Empire was transformed into a modern, secular state, and Istanbul was transformed along with it. Today, in Mak’s words, it is a metropolis “largely cut off from its own history.”

When viewing that history, the bridge serves as a link between present and past.

De brug was released in a record-breaking first-edition print run of 890,000 copies. Because the story is set in Istanbul, the Foundation for the Promotion of the Dutch Book decided to simultaneously publish a Turkish translation of this special edition. A German translation is now in progress.

Geert Mak’s thoughtful travelogue sketches out Istanbul’s past, and provides a touching portrait of its present inhibitants… His thoughtful, beautifully written book is suffused with respect for the richness of the individual life.
Independent