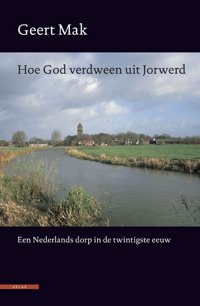 First published in October 1996 - Hoe God verdween uit Jorwerd is the biography of a village during the “silent revolution”, between 1945 and 1995. It is the story of farmers and big money, of the little shopkeepers and the advancing city, of the church steeple that collapsed and the newcomers who no longer bother to say “hello”. The story of beautiful Gais Meinsma, of the greengrocer and his homesickness, and of Peer, who breathed his last amid the curly kale.

The Frisian village of Jorwerd is unique, but no exception. In Hoe God verdween uit Jorwerd, Geert Mak talks about a study in which three totally different village communities were compared: one in Greece around 600 B.C., one in England around the year 1900, and a modern day Mayan village in the Yucatan. As it turned out, there were any number of striking resemblances between the three, including common opinions about work ethic and farmland, and concerning the role of young people in village life. Or, as Mak himself puts it in his book about “a Dutch village in the twentieth century”: “In many ways, the differences between Jorwerd and Amsterdam  (…) were significantly greater than those between Jorwerd and any given village in England or Germany.”

For centuries, villages like Jorwerd formed a universe unto themselves. Somewhere around “the primeval year 1858”, Mak says, this Frisian township reached its zenith as “classic village community”: “It had in those days more than six hundred inhabitants, there were shops, bakeries and cafés, and for everyone who lived within half an hour of the village it served as a sort of mini-center.” A little more than one hundred years later, all that had changed completely.

Jorwerd is no exception, but it is unique. If you take the time to zoom in on its history, the way Mak does in his book, you will get to know them: the men and women who spent their lives here, all with stories of their own. Hoe God verdween uit Jorwerd is the life story of a village that remained sheltered from the winds of change and almost unchanged for centuries, but which then felt that new age roar over it like a typhoon. The old farming society, in which social relationships were fixed, in which responsibilities were clear and expectations modest, was turned upside-down. Outsiders moved in, people who did not even bother to say “hello”, or who did so differently; farm equipment and milking machines made their appearance, new houses were built and noises, smells and colors changed. In his description of that process, of how the old familiar days disappeared beyond the horizon of history, Mak shows himself to be a chronicler par excellence: the book itself is extremely well-documented, written in a style which is evocative but never descends into melancholy brooding.

Hoe God verdween uit Jorwerd is kin to that school of history writing of which Emmanuel Le Roy Ladurie’s  Montaillou is an exponent as well: the description of normal, everyday life in the past. Thanks to Mak’s study we can steal a peek behind the ragged fringes of time – and occasionally dab away a tear for what will never come again. 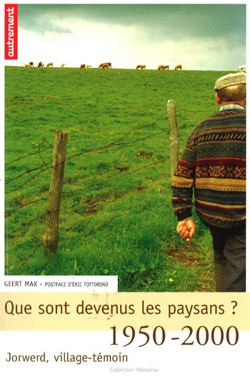 Foreign translations:
Jorwerd: the death of the village in late twentieth-century Europe was translated in German, French and English.