In Europa (In Europe) 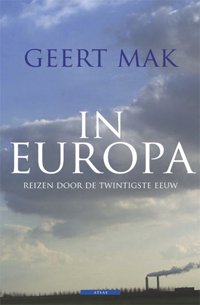 First published in 2004 - Following a tangle of routes that led him to London, Volgograd and Madrid, past the bunkers of Berlin, the perfumed closets of Helena Ceausescu in Bucharest and the toy automobiles in an abandoned day-care center in Chernobyl, Geert Mak traveled in the footsteps of the 20th century.

What does a penniless, toothless octogenarian in a remote Rumanian village have in common with the inhabitant of a Dutch housing tract, with his hybrid car parked at the curb and his golf clubs waiting in the hallway? Not a great deal – yet they both live in a country that is part of Europe. Within the boundaries of that continent, various layers of time seem to slide across each other like ice floes in a river: one place may give you the feeling that time has stood still, while in other places the innovations take place at breakneck speed.

In 1999, as another chapter in a European century was drawing to a close, Geert Mak set out on a journey through that Old World. His objective? “It was to be a sort of final inspection: what shape was the continent in, here at the conclusion of the twentieth century?” At the same time, it was a “historical journey”: “I would follow, as far as possible, the course of history, in search of the traces it had left behind.” The book’s table of contents consists of an impressive list of historical places: Verdun, Ypres, Berlin, Predappio, Leningrad, Vichy, Nuremberg, Lourdes, Chernobyl and Novi Sad, to mention only a few. Everywhere he went, Mak visited auspicious locations, nosed through archives and spoke to writers and historians, philosophers and politicians, former resistance fighters and enlisted men - but also to common, everyday people who told him about their lives. All those conversations, all those documents, all those books resulted in an impressive story about a century in Europe, a continent that may long have borne a single name but was never truly a single entity. For how could it have been? This, after all, is a continent containing widely divergent cultures within its boundaries, a place where the seemingly contemporary can be so badly out of synch - as illustrated painfully not so very long ago when civil war broke out in Yugoslavia, only two hours by plane from calm, diligent Holland.

The twentieth century is over and done with, it is history now. Wars raged, the Wall fell, a European currency was created. In this powerful monograph we experience it all over again, often by means of firsthand, eyewitness accounts. And, as the story draws closer to the present, the chaos seems only to increase. That is part of the paradox of history: the further a period retreats from our field of vision, the clearer its image seems to become. Mak’s book is a fascinating mosaic of stories and historical accounts: later, at a greater distance, it may also be one in which we detect entirely new patterns.

“In early 1999 I left Amsterdam for a journey through Europe that was to last a whole year. It was to be a sort of final inspection: what shape was the continent in, here at the conclusion of the twentieth century? At the same time, it was to be a historical journey: I would literally follow in the footsteps of history, through the century and across the continent, starting in January, at the remains of the Paris World’s Fair and vibrant Vienna, and ending in December, amid the ruins of Sarajevo.

“Throughout the entire year I traveled with the century, along a tangle of routes, past London, Volgograd and Madrid, past the bunkers of Berlin, the perfumed wardrobes of Helena Ceausescu in Bucharest and the toy cars in an abandoned day-care center in Chernobyl. And I talked to the witnesses: with writers and politicians, with resistance fighters and officers, with a farmer in the Pyrenees and with the grandson of the German Kaiser, dozens of Europeans who spread their stories out before me.

“This travel account is about the past, and about what the past does to us. It is about strife and ignorance, about history and fear, about poverty and hope, about everything that divides and connects our new Europe.”- Geert Mak 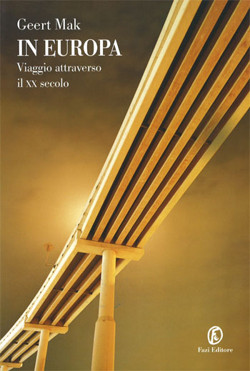 Foreign translations:
In Europe was and is being translated in German, Hungarian, Italian, Spanish, French, English, Polish, Turkish, Japanese, Chinese, Norwegian and Greek.

Sue Baker in Publishing News: ‘When you’re reading to a deadline, a hulking manuscript of over 800 pages is enough to sink the spirits. “This better be good,” you mutter, knees buckling under the weight as you sit down to read, and read, not dreaming that, by the end, you’d wished it twice as long and that, in fact, 800 pages were too few. Geert Mak’s book is a quite brilliant concept … A breathtaking work.’