The life of Geert Mak

Journalist and historian Geert Mak was born in 1946. His father served as a Protestant clergyman in the Dutch province of Friesland; the family also lived for a time on the Indonesian island of Sumatra. Mak started in Amsterdam as editor of a the weekly De Groene Amsterdammer, worked for years at the foreign desk of the VPRO broadcasting company and as city-reporter of the NRC Handelsblad daily. As from 1992 he has dedicated himself increasingly to the writing of books. With 'Jorwert, The Biography of a Village', 'Amsterdam, A Brief Life of the City' and 'The Century of my Father' he became one of the most successful authors of the Netherlands.  'In Europe', his voyage through the continent and through the twentieth-century Europe, became also in the rest of Europe a classic. On behalf of the city of Amsterdam he held the 'Wibaut Chair' as extraordinary professor of urban issues at the University of Amsterdam. He was in 2008 awarded with the Leipziger Buchpreis für Europäischen Verständigung. His books are translated in more than twenty languages.

Geert Ludzer Mak was born in Vlaardingen on December 4, 1946, as the youngest son of the Dutch Reformed clergyman Catrinus Mak and his wife, Geertje van der Molen. Geert Mak grew up in the towns of Leeuwarden and Hurdegaryp, and attended the Reformed Gymnasium in Leeuwarden. He wrote a detailed account of his own family history in the bestselling De Eeuw van Mijn Vader (My Father’s Century).

From 1965 on he studied law and sociology at the VU University Amsterdam and the University of Amsterdam. In addition, he worked from 1970 to 1972 as parliamentary assistant for the Pacifist Socialist Party in the Dutch Second Chamber of Parliament.

From 1972 to 1975 he taught constitutional and immigration law at the University of Utrecht. From 1975 to 1985 he was a contributing editor to the De Groene Amsterdammer weekly, specialized in urban and immigration issues.

In 1985 Mak wrote his first book, The Amsterdam Dream, about “the problem of Amsterdam”. This was followed three years later by Aangeschoten wild (Lame Ducks), a book on public administrative culture in the Netherlands which he wrote in collaboration with philosopher Paul Kuypers. During this same period he produced a host of articles and essays about administrative and urban-management issues. In 1990 he was a co-founder of the Fund for Special Journalistic Projects, and of the literary non-fiction journal Atlas. His anthology of journalistic and historical eyewitness reports, Reportages uit Nederland (Reports from the Netherlands) appeared in 1991, and was later republished as Ooggetuigen van de vaderlandse geschiedenis (Eyewitnesses to Dutch History) and, in collaboration with Rene van Stipriaan, in Ooggetuigen van de Wereldgeschiedenis (Eyewitnesses to World History) in 1999.

In 1992 he published De engel van Amsterdam (The Angel of Amsterdam), comprising an “anatomical lesson” about the Dutch capital and a series of portraits of its inhabitants. That collection was followed three years later by Een kleine geschiedenis van Amsterdam (Amsterdam: A Brief Life of the City). This popular history of the city was nominated in 1996 for the Belgian Golden Owl Award and has been translated into German, Czech, Hungarian and English. Mak reached an even broader public in 1996 with Hoe God verdween uit Jorwerd (Jorwerd), a by-now classic description of the rapid demise of European peasant life. In 1999 that book won the Henriëtte Roland Holst Prize, and it has since been translated into German, French and English.

1997 saw the publication of Het Stadspaleis (The City Palace), a history of the Royal Palace on the Dam in Amsterdam. In 1998 Mak wrote the Dutch Book Week essay Het Ontsnapte Land (The Land that Escaped), a historical and, at the same time, current account of a journey through the modern Dutch landscape. On behalf of the RVU television broadcasting organization he took a walking tour of the Netherlands, following in the footsteps of two students, Jacob van Lennep and Dirk van Hogendorp, who in 1823 published a lively account of their own journey. A modernized version of Van Lennep’s travel account – edited by Marita Mathijsen -  appeared at the same time.

Mak’s most popular book was released in 1999: De eeuw van mijn vader (My Father’s Century), which has since sold more than 500,000 copies. The book is a history of the Netherlands in the 20th century, closely interwoven with the story of his own family, reconstructed with the use of letters, postcards, interviews and other material. Translations have appeared in Danish and Hungarian, and De eeuw van mijn vader was a success in Germany as well. Following a popularity poll held by the Dutch daily newspaper Trouw, the book won the Trouw Public Prize for Dutch-language literature. 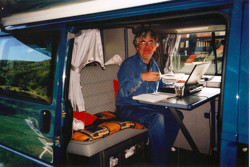 In that same year, the final one of the millennium, he crisscrossed Europe for twelve months; his reports were published each day on the front page of the NRC Handelsblad daily newspaper. It was to become the account of both a journey across the continent and through time: day after day, readers were able to follow the story of European history in the 20th century, embellished with countless local observations and interviews with eyewitnesses. The book In Europa (In Europe) appeared in 2004. That too was an enormous success: today, five years later, more than 400,000 copies have been sold. It has appeared – or will soon appear – in German, Hungarian, Italian, Spanish, French, English, Polish, Norwegian, Japanese, Ukrainian, Turkish and Greek. In Europa was filmed by director Roel van Broekhoven in the form of a 35-part TV series, narrated by Geert Mak and broadcast by the VPRO network during the 2007/2008 and 2008/2009 seasons. And, as he had for De eeuw van mijn vader, Mak also won the NS Public Prize for Dutch literature for In Europa.

Following the murder of Theo van Gogh in 2004, Mak  published two pamphlets: Gedoemd tot kwetsbaarheid (Doomed to Vulnerability) and, in reaction to his critics, Nagekomen flessenpost (Belated Message in a Bottle). In those pamphlets he pulled no punches when it came to haranguing against the “fear- mongers”. He himself saw the crisis in Dutch society as something more complicated than simply a conflict between established citizens and newcomers, and he called for well-considered and temperate action. At the same time he entered a fiery plea for the conservation of such typical Dutch values as freedom, administrative transparency and tolerance. That standpoint, at least at the time of publication, with mixed reactions.

In the spring of 2007, Mak published the Dutch Book Week special De brug (The Bridge). The book documents a journey covering no more than five hundred meters: the length of the Galata Bridge linking Istanbul’s traditional and more modern districts. Mak spent weeks getting to know the bridge and winning the confidence of – often penniless – passersby and street merchants. De brug was unique in at least two ways: first of all, Mak was the first writer of literary non-fiction since 1983 to pen the Book Week special.  Secondly, the book was already available in Turkish at the moment it appeared in Holland. In the meantime De brug has been translated into German, English and Greek. In the spring of that same year, he led a series of three forums dealing with the future of Europe at Noordeinde Palace in The Hague. The participants included Krystof Pomian, Robert Cooper and Bronislaw Geremek, and the concluding report was published under the title Paleis Europa (Europe, the Palace). Along with historians Piet de Rooy, Jan Bank, René van Stipriaan and Gijsbert van Es he worked during that same period on the Verleden van Nederland (Dutch Past) project, which resulted in 2008 in the publication of a modern, sobering and often surprising “national” history textbook.

In the period 2000 – 2003, on behalf of the City of Amsterdam, Geert Mak held the “Wibaut Chair” as  extraordinary professor of urban issues at the University of Amsterdam. As a part of that professorship he also gave numerous lectures concerning the city, including one at Princess Maxima’s introduction to the Dutch capital. His inaugural lecture, dealing with the image of “the ideal city” held by residents of Amsterdam throughout the centuries, was published in 2001 under the title De Goede Stad (The Good City).  This same title was applied to a collection of his writings that appeared in 2007.

In 2002, for his achievements on behalf of the city of Amsterdam, Geert Mak received the IJ Award. He has twice been awarded the title “Dutch Historian of the Year”. In 2004 he received an honorary doctorate from the Open University of Heerlen for his achievements in historiography. In March 2008 he won the prestigious Leipziger Buchpreis zur Europaische Verstandigung for his book In Europa. In April 2009 the French government awarded Geert Mak the title Chevalier de la Légion d’Honneur for his personal achievements, his writing talent and for In Europa’s contribution to the process of European unity.

Geert Mak is married and divides his time between Amsterdam and Friesland Province. His books – with the exception of the two Ooggetuigen volumes – have all been published by the Uitgeverij Atlas publishing house.